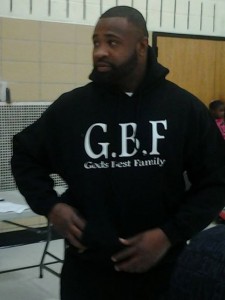 Turell grew up in Baltimore, Maryland and experienced many hard times and daily struggles.

He witnessed his mother’s struggle to raise six children on her own on a very limited monthly income. Although his father lived in the same South Baltimore neighborhood, he struggled with drug addiction. Witnessing his parent’s struggles was very sad and difficult for Turell.

As he grew older, he wanted to help his parent’s but was not sure how to do this. He developed a drug addiction and began to get arrested. He soon realized that his siblings looked up to him and he wanted to set a good example for them.

He began to contribute his time, knowledge and finances to help the youth in the community by spending time with them playing dodge ball and cards and having pizza parties. Turell saw that many other children were experiencing the same difficulties and pain that he had experienced.

He was hired by the City of Baltimore and his position gave him the opportunity to help his community. He spoke at a conference for youth sponsored by the City and hosted an evening talk show on Larry Young’s radio station. He earned a certificate for service to his community. He came to realize that God had saved him for a life of crime to being able to give back to the community and to help others and decided to form the Organization with the help of other members of the Board of Directors.